The Urine Economy
Montreal, May 2005

So what is the urine economy? Why should you care? Despite being somewhat odd, perhaps gross to a lot of people, the idea of a urine economy is pretty important, especially if you agree with the thesis that we will inevitably use up all our fossil fuels sometime in the future.

When the end of our oil supply pops up in conversation, we tend to mention only its effects on transportation and power plants. Hydrogen cars come to mind, solar panels, and wind generators. What many people don’t consider is the dependency of agriculture on oil. How dependent is the agricultural industry on fossil fuels? Apart from the fuel requirements of tractors and trucks, farmers use massive amounts of fertilizer to grow crops like corn and wheat. The primary fertilizer used – Nitrogen (N) – is produced from natural gas, a non renewable resource integral to our fossil fuel based economy.

Since the discovery of the process that converts natural gas to nitrogen in 1909 (see article on Fritz Haber ), world crop yields have increased many times over as a result of cheap and plentiful fertilizer. This has helped boost world population and economies everywhere. Soil quality has tumbled, but this hasn’t mattered – just throw more nitrogen on it has been the attitude. As with the automobile, we have become hostage to the benefits of manufactured nitrogen – if supplies were to suddenly be cutback, countries all over the world would experience famines.

Where can we find the nitrogen to replace natural gas which, though still plentiful, is destined to eventually disappear? A look to the past shows that in the 19th century, farms were largely self-sufficient, using nitrogen rich manure from farm animals to fertilize their crops. The Chinese went even further, using human waste as fertilizer (see this website on "nightsoil" , purported to improve crop taste). Is this last an option in North America today?

Human waste, urine in particular, is rich in nitrogen. We have always been part of the earth’s nitrogen cycle , consuming vegetables, returning nitrogen to the soil as waste, and growing crops that use this nitrogen. With the growth of cities, construction of sewer systems, and finally the discovery of oil, we separated ourselves from the cycle. Our waste now enters our home piping system the moment we flush our toilets, meeting up in the sewer mains with waste from restaurants, offices and factories. Useful nitrogen gradually gets mixed with medical waste, chemicals, and metals as it passes through the system. At the water treatment plant, contaminants are removed from the water and end up as sludge . This sludge has historically been buried in landfills or incinerated, all the useful nitrogen wasted.

With the recycling trend and the even newer composting trend, we are becoming more aware of the usefulness of our own waste. The development of toilets with separate urine and feces drains on the market is a start, see the Novaquatis website for details. It is possible to imagine in the distant future nitrogen collection becoming as sophisticated as garbage pick up. Once a week, trucks might pick up a family’s urine output, take it to a plant to be treated, and drive the final product out to farmers to be used in fields. There is something idyllic in this idea – cities returning to countryside what they have taken. Keep in mind that if we are going to have a hydrogen economy in the future, and if that hydrogen is going to be produced from corn, as many speculate , than that corn mustn’t depend on natural gas as its fertilizer source, otherwise we’ll just stay hostage to fossil fuels. The corn to make hydrogen must be grown with fossil fuel free fertilizer.

Systematic efforts to harvest human waste will have tremendous problems overcoming several deep-seeded human fears, namely urophobia and coprophobia (fear of urine and feces). In the West in particular, we have become used to the immediate disappearance of our own waste the moment we flush the toilet. Waste harvesting violates this tradition of ours, requiring us to think about unpleasant topics like sewers and taboo bodily functions. Would you be willing to eat a carrot nourished by someone else’s urine? (Check out this article from the New Internationalist that deals with these issues).

Hopefully the profit motive will help spur entrepreneurs and governments to investigate the usefulness of harvesting nitrogen from urine. Nitrogen produced from natural gas is fetching around 35 cents a pound nowadays in the States, a record high. If the average individual excretes about 12 pounds of nitrogen a year, the market is putting a value of $4.50 on an individual’s urine output. A family of four produces $17.60, a neighbourhood of 300 houses about $5,500, the entire U.S. $1.3 billion, and the world $25 billion. This is a lot of wasted nitrogen, and the potential for profits that draws all entrepreneurs.

The problems nitrogen entrepreneurs must solve are primarily social, not technical, as opposed to fuel cell entrepreneurs who have massive technical obstacles in their way but few social ones. The nitrogen is there, has value, is easily treated, and only needs a collection and distribution system to be put in place. Many minds must be changed though, and the small ways people do things will have to be updated. Just remember that the next time you use the bathroom, you really are pissing away cash.

I’m curious what your thoughts are on this idea. Do you think it makes sense, is it disgusting, disturbing, impossible? Would you change the way you do things to help out?

An article on sustainable agriculture by Folke Gunther
A Swedish article called Closing the Nutrient Cycle . Respect for the Swedes who are one of the leaders in this movement. 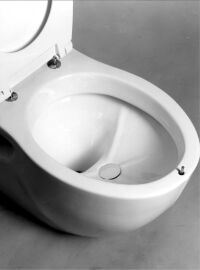