On the Third Day
Montreal, January 2003

The Bible tells us that after his death, Jesus Christ descended into Hell. On the third day he rose again. We know from the accounts of Matthew, Mark, Luke, and John that Christ visited his eleven remaining disciples (Judas had hung himself three days before) after his resurrection on earth. He then ascended into heaven.

What did Christ do for three days in Hell?

There is no account in the Bible of what happened. All our knowledge comes from what Catholic theologians and medieval artists have surmised, as well as the Gospel of Nicodemus , a Gnostic text not accepted by Christians. Catholics believe that Christ broke open the gates of Hell to free the souls who inhabited Limbo, the top-most level of the nine circles of Hell. The prophets of the Old Testament, known as the Patriarchs, lived in this circle. Limbo was much more benign than the levels below, not much in the way of punishment occurred here since the residents of Limbo were considered ‘good guys.’ Read Dante’s Inferno and you’ll find that the pain really only started on the second circle, that of the Lustful. Check out this beautiful map of the nine levels of Inferno.

St. Pius tells us that the souls of these Patriarchs were not admitted into heaven before the death of Jesus Christ because heaven was closed by the sin of Adam, and it was only Jesus Christ who reopened it by his death. Basically, the Patriarch’s spent thousands of years twiddling their thumbs waiting for something to happen.

The descent of Christ into Hell, though absent from the Bible, has captured the imagination of many artists. Albrecht Durer’s Harrowing of Hell shows Jesus Christ saving Adam and Eve, Moses, and St. John the Baptist from the depths of Inferno. Friederich Pacher, a 15th century painter, leaves us Christ in Limbo , a depiction of Christ leading a procession out of the broken gates.

About the picture I drew above. I’ve only heard this by way of the grapevine, but nowadays, many angels like to recreate Jesus’ descent into hell as a sort of adventure vacation. Most of the vacation destinations open to angels – the Andromeda Galaxy, the dark side of the moon - are either too cold and dark, or like the Fifth Dimension – a little too far. Hell offers an exciting combination of warmth, thrill, and mystery, plus the opportunity to make a pilgrimage to the same place Jesus Christ once spent three days.

I like this one. I think it's new or I didn't see it last time. More me is the album cover art of iron butterfly the heavy album with the ear of stone, and the mechanical butterfly...mathomophisist (spell check that word) theres a figure on the back of a woman in colors reaching for a butterfly that seems to be coming to her. cool colors...not much into bloody images,,,less is more...i like this one ,,i think i'd like it more if the angel was the only being in it. the contrast angel vacation in hell was made without them.

This must be what your talking about. 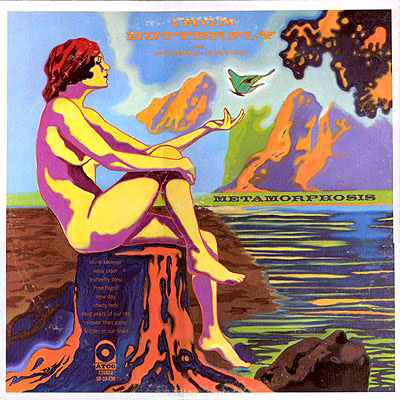 The Heavy album was released in 1968 - these guys are still on tour, impressive. The artist for the back is named Robert Blue.